The PDE (Park-Data-Collection-System) is a fanless and diskless embedded computer with a wide operating temperature range that is installed in the parking garage to collect and transmit the parking data. The PDE supports one Ethernet and two serial (RS-232 and RS-485) interfaces as well as several digital inputs and outputs.
Inside a parking garage, the parking data is collected by the PDE, when available, from the parking management computer via a serial RS-232 interface. The serial protocols used by most major vendors are supported. This option is called PDE-Serial. 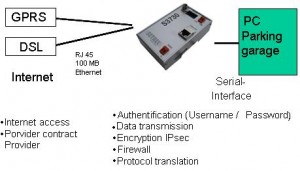 In facilities where no parking management computer is installed, the PDE interfaces directly with sensors (e.g. barrier closure contacts, induction loops, etc.) and counts incoming and outgoing traffic. A terminal for the garage operator to make adjustments to the capacity and availability data, when necessary. This option is called PDE-Parallel. 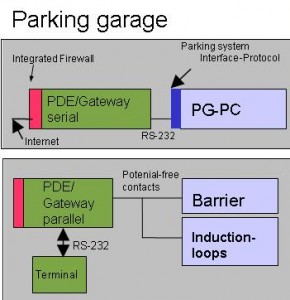 PDE-Serial: for collection of parking data from an existing parking management system, and its transmission to PGS-Central via the Internet.

PDE-Parallel: for counting of parking data using sensors, and its transmission to PGS-Central via the Internet.

A terminal is pre-installed with an application that displays capacity and availability. The user can, using the stylus, modify these numbers which are then transmitted to the terminal using RS-232. 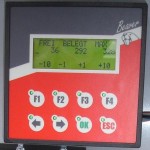